The first Anniversary of Motu Proprio Summorum Pontificum celebrated in the former Benedictine Abbey of Mogilno, Central Poland at the weekend of 5-6.VII.2008

At the weekend of 5 to 6 July 2008, the First Meeting of Motu Proprio Summorum Pontificum Generation, kindly arranged by a couple of Bydgoszcz, Mr Krzysztof and Mrs Beata Zagozda, to celebrate the anniversary of the memorable day of 07.07.07 much longed for in our Catholic Poland, was held. 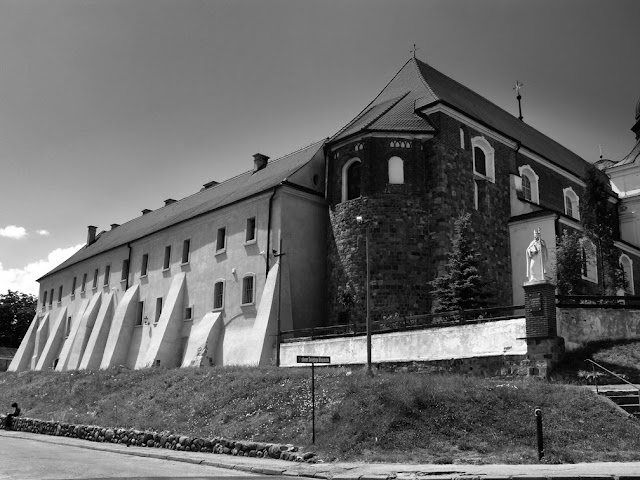 There were approximately 50 participants who attended the meeting organized during the holiday season that is usually a bit difficult in terms of attendance, some people came just for a day.

There were two Tridentine Rite Masses celebrated by Rev. Tadeusz Kwiecień MIC (of Our Lady of Licheń Shrine) in the Mogilno Abbey’s Roman crypt, since the works in the upper part of the church, high altar inclusive, made it impossible this time. The first Missa Cantata was offered at 3p.m., shortly after arrival, with a’capella singing of Missa de Angelis, on the stone altar claimed the oldest in Poland, and we entrusted to Our Lord our Holy Father and His work. Our dear young priest, Rev. Wojciech Grzesiak of Archdiocese of Katowice was unable to come and offer Mass and was replaced by Rev. Tadeusz Kwiecień, as the former was taken to hospital. The special award of UNUM PRINCIPIUM, a Bydgoszcz-based traditional community, for the efforts and courage demonstrated by our dear Rev. Wojciech Grzesiak will be handed over to him shortly. 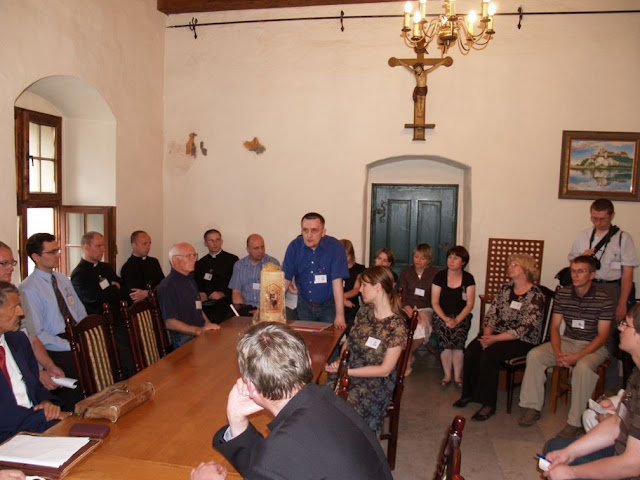 ”How to organize ourselves” — address by
Krzysztof Zagozda, the main organizer. 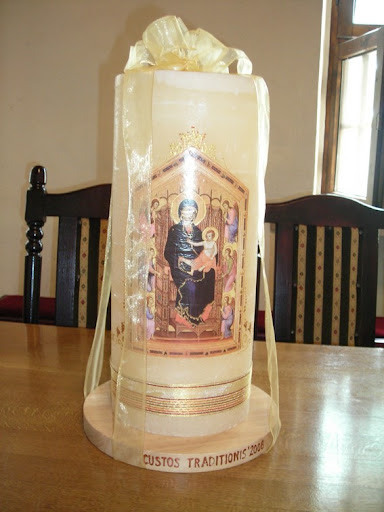 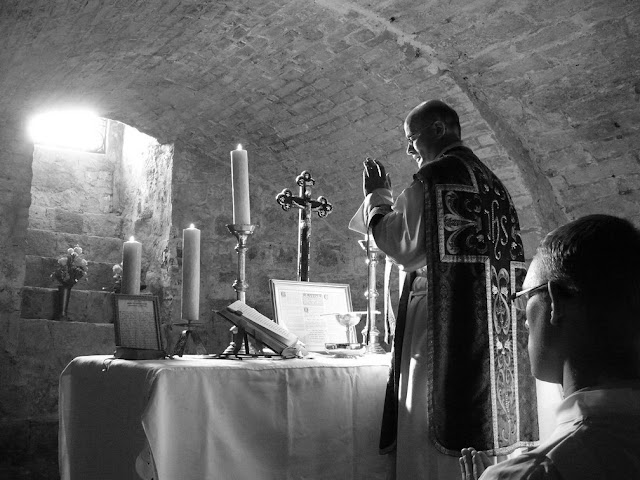 Father Kwiecień MIC offering Mass in the Roman crypt
on the stone altar claimed the oldest in Poland. 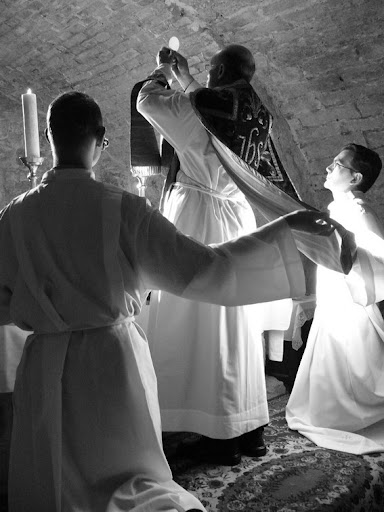 The Elevation of the Host. Father Kwiecień
assisted by Tomasz Filipiak and Dominik Lang.
The Mass was followed by the solemn act of consecrating ourselves heart and soul to the Blessed Virgin Mary, whereby the participants implored the Mediatrix of All Graces to grant us new blessed fruits of the pontificate of Pope Benedict XVI.

The second Mass was offered at 6.30 early morning on Sunday for Rev. Wojciech Grzesiak in the sun rays getting through the narrow crypt window touching the very altar. The participants sang Missa XI Orbis Factor, again led by three Polish seminarians, Tomasz Wuczko, Sergiusz Orzeszko and deacon Grzegorz Śniadoch from the France-based Institute of the Good Shepherd, the latter awaiting his final ordination we are much looking forward to.

The first day also featured planting the evergreen yew tree, a symbol of Benedict XVI Pontificate, with a stone inscription reading “Cooperatores Veritatis”, Collaborators of the Truth, whereby everyone was welcome to take one or more out of 70 blessed saplings home to plant in the garden. 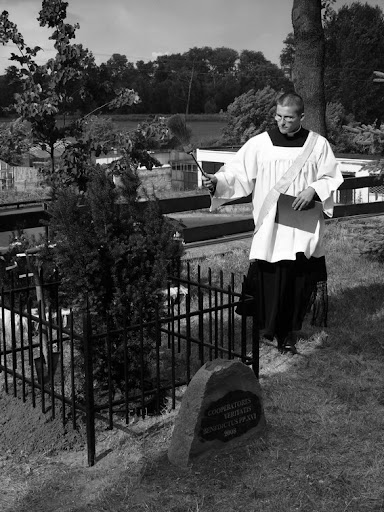 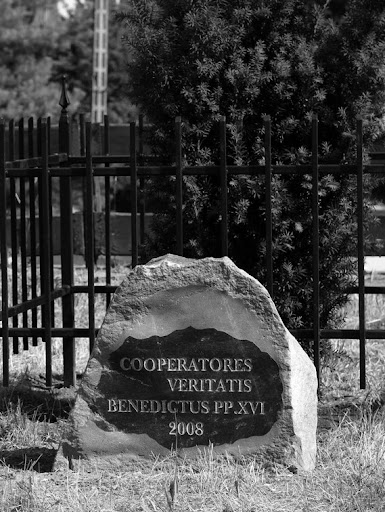 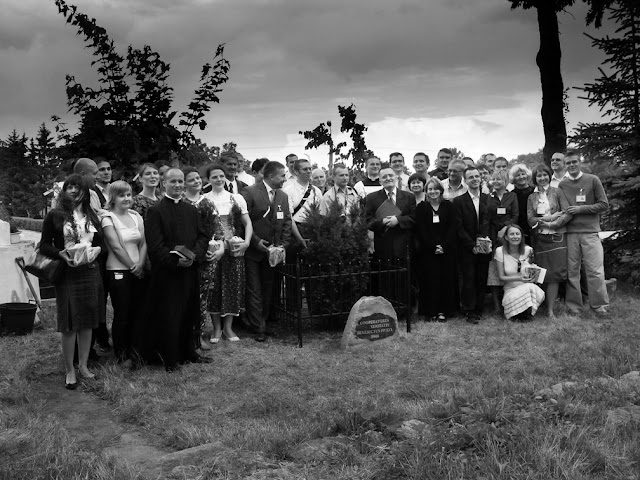 The participants with the yew tree saplings, with Krzysztof Zagozda
(holding files), the main organizer. 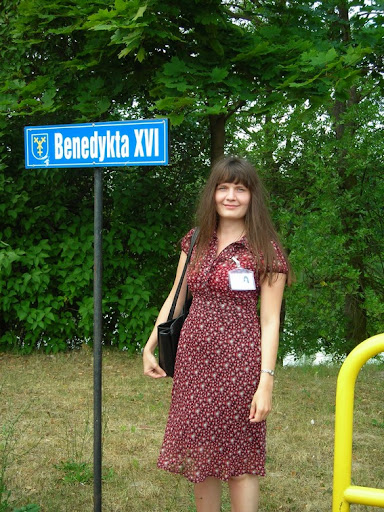 The only Benedict XVI street in Poland with Anna Staszczyk,
treasurer of the Society of the Good Shepherd.
Then, during a conference, Tomasz Filipiak delivered an annual report on the implementation of Summorum Pontificum in Poland and a debate was held on more generous use of this significant document. According to the report, Tridentine Rite Masses are now regularly offered in Bytom, Kraków, Lublin, Poznań, Rzeszów, Toruń, Wałbrzych, Warsaw and Wrocław. Also, the very first masses since the 1970s reform were celebrated, among others, in Łódź (11.11.2007), Bydgoszcz (16.01.2008), Płock (1.06.2008), Koszalin (1.06.2008) and in some other places sporadically, incl. private Masses. How often it will now be possible to hear Mass in the new places, time will tell. There are also arrangements being made in Gdańsk, and we have already found a very committed priest, Rev. Piotr Baranowski. Will some other priests come out bravely of their hiding?

Day 1 closed with the address delivered by deacon Grzegorz Śniadoch talking about the future of Tradition in Poland and thereto-related difficulties and obstacles. We are much indebted to him for his faith and commitment and shall support him and other young Polish seminarians now studying at the Institute in France as much as we can. 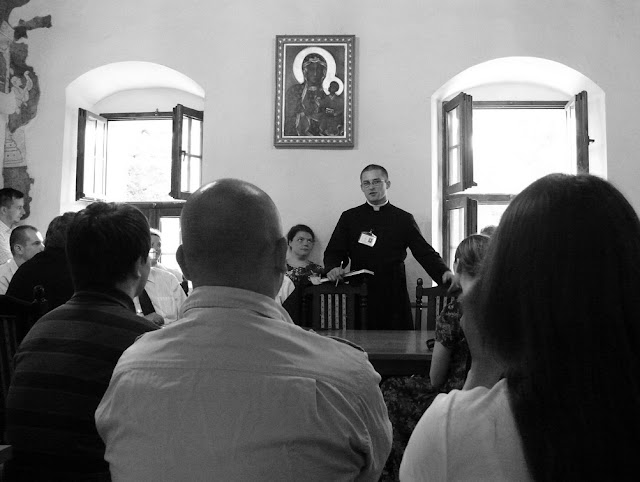 Deacon Grzegorz Śniadoch IBP delivering a conference speech.
Sunday began with early morning Mass and a speech on how to arrange larger annual Traditional Pilgrimages to Czerwińsk (3 days) and to the Our Lady of Jasna Góra (Bright Hill) Shrine in Częstochowa (9 days), to thank our Black Madonna for all Her care and intercession followed by presentation of the Good Shepherd Institute, all delivered by deacon Grzegorz. The concept of lay fraternity revival was also discussed.

Then we enjoyed a guided tour round the abbey. 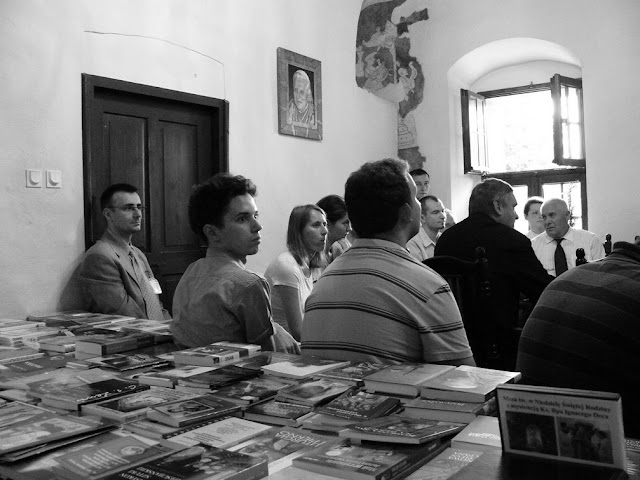 The meeting was enriched by Piotr Nastawski of Wałbrzych, South Poland, editor of www.sanctus.pl portal who came laden with interesting books, and a selection of CDs, incl. Gregorian Chant and other sacred music. So we are now looking forward to the development of Tradition in Poland, incl. valuable books and new recordings.

Next year 2nd anniversary venue is planned to be Our Lady of Licheń Shrine, much more spacious a place.

We wish to thank all attendees.